My Dad has always been fascinated with Military stuff. You name it and he probably likes it. Tanks, Planes, Ships, Submarines, Helicopters, Machine Guns, Anti-Tank Gunners, Missiles, etc. He has never served but he has always shown an interest in all things Military. I remember him taking my sister and I to these military museums when we were little. I got to see helicopters, crawl around in tanks and move the turret, and I even saw (and heard and FELT) them fire up one of those old silver colored war planes out at Falcon Field in Arizona. I capitalize “felt” because the strong winds of the propellers chucked sand and rocks and it hurt!

Every time Father’s Day has come around in the past I have rummaged through the card aisle in the grocery store hoping and wishing I could find a cool Father’s Day card that didn’t have something to do with Fishing, Hunting, Ducks, or Sailboats. I would always end up picking the sailboat cards since that was something he likes as well. I was never excited to give him his card and it never really bothered me that much since I felt I did the best I could. I’m so happy that I got into card making, so this year I get to give him a card that he will think is cool! My dad is one-of-a-kind and that is the type of card he deserves!

Now, before you look at this card, remember I am new to all of this crafty wonderfullness. I also decided to play around with some mediums I have never tried before. I think if I had more military themed items I could have done this card a little better, but I think it’s pretty cool considering what I had to work with! 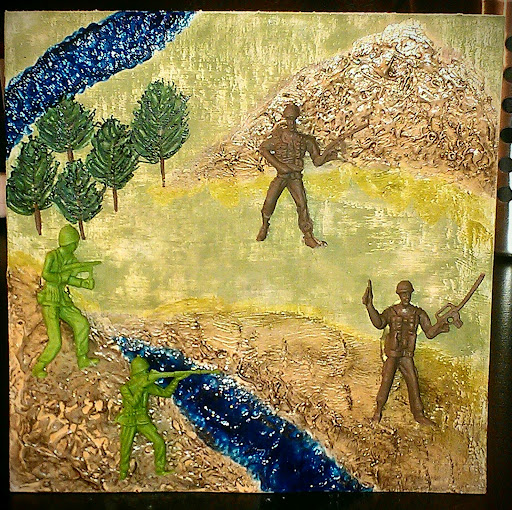 Can you guess which side is my Dad’s team?! LOL. The brown army men are surrendering! I had a lot of fun making this and learning new techniques along the way. For instance, I used “modeling paste” to make the mountains. I just put my finger in the jar and used a quick patting motion to put it on my chipboard that was prepped with white acrylic paint. After drying it with a heat tool, I went over it using a cosmetic sponge and some “Tea Dye Distress Ink”. I let that dry and then went over that using some “Spanish Copper Rub n’ Buff” using my finger. After I was done with the mountains I used a sponge with “Forest Moss Distress Ink” and filled in where the grass should be. I hadn’t realized until then that I did not cover all of the mountain terrain with the Tea Dye ink. I noticed because the parts that I missed were now a lighter green color. That is just how the Forest Moss reacted with the modeling paste. I figure that was a technique that I unintentionally learned! Luckily, the effect that happened is something I can live with and I think it gives it even more character 🙂

I will be posting a video about this card either later today or tomorrow. I talk about how I made the stream and the rest of the card. F.Y.I. – The army men you see here were from the Dollar Tree and they came in a big pack. I just carefully nipped off the platforms under their feet using my Tonic Studios scissors (LOVE those scissors by the way!).

I hope you like this card and it gives you an idea of what type of card you might want to make for your Dad. I know if I had used a paper pad or done something more traditional it may have looked a little better, but my only focus on this card is to have my Dad open it, smile, and say “Cool!”.

Thanks for stopping by !

All text and images on this site are either owned by me or I was given permission to use them. If you would like to use any images or text from this website, please write intoxicatingarts@gmail.com and ask for permission. Project tutorials on this website are intended for recreational personal use and not for personal financial gain. You are not allowed to use any images or trades learned on this site for financial gain. This is a Trademark Registered & Protected Blog . Thank you for your consideration!